OK, so I know many of you may not be in the mood for April Fool’s right now, but because, like a lot of people, I have too much time on my hands, and because I haven’t written about it before, I thought I’d write a little about the Day, and its origins and associations.

The origins of April Fool’s Day – also known as All Fools’ Day, April Noddy Day, and, in Scotland, Huntigowk Day or Gowkin’ Day – are obscure, though it is thought to have arrived in England sometime in the middle of the 17th Century, from the continent (France, Germany, Sweden, and Portugal have similar celebrations, and it was later exported to the United States). On April 1st 1698, several people apparently received invitations to the Tower of London to see the lions being washed (the Tower did, in fact, for many years house a zoo), only to be disappointed upon arrival. The Day may also have more ancient antecedents – it falls only ten days or so after the Spring Equinox, and its spirit is similar to Saturnalia, and to the Feast of Fools or Feast of Asses of the Medieval period: for a set time – in this case between midnight and noon on the 1st April – the normal order is turned on its head, and anyone, in theory, can perform harmless pranks on others. Young apprentices were often the victims of these, being sent on fruitless errands to “…fetch a pint of pigeon’s milk, a pennyworth of strap-oil or elbow-grease, a guttering-peg, or some other non-existent commodity… a pot of striped paint, or a soft-pointed chisel, or a box of straight hooks” (Christina Hole, British Folk Customs, Book Club Associates, 1976).

The Scottish equivalent is to send someone on a “gowk’s errand” (“gowk” meaning cuckoo or fool), where they carry a note that, unbeknownst to them, has the instruction, “Hunt the gowk another mile”, and the recipient accordingly sends them on to another house, and so on, until they twig what’s happening.

Over the last century, these tricks have migrated onto mass media, and there have been some memorable April Fools over the years here in the UK. I recall a piece on Radio 4 back in 1997 claiming dogs could speak, and, forty years earlier, the BBC’s Panorama programme made a piece about the “spaghetti harvest” which has attained near-legendary status:

But any April Fool has to be performed by midday, or the joke’s on you –

April Fool is gone and past / You’re the bigger fool at last.

(For more detail about April Fool’s Day and its origins, the Museum of Hoaxes is an excellent resource)

Something to seek out once the restrictions are lifted.

In my talks with Dartmoor walkers I’m always surprised at how few have ever been to Pixies Holt.  Many confused it with the education adventure centre on the hill out of Dartmeet, which bore the same name and in truth the legendary lair of the little folk of Dartmoor is not very far away. I suspect that one difficulty is finding the cave in the first place.

It took me a long afternoon of searching to locate the Holt, when I first looked in the 1970s.

It was a hot and balmy day and I tramped up and down the hillside above the Dart for a good few hours without success. Then I dug William Crossing’s Guide to Dartmoor out of my rucksack and scanned it for a clue.

Hope you’re all coping OK with the strange situation we’re living through.

Here in the UK we’ve been “locked down” since last Monday, and are only allowed out to go to work, shop for food and medicines, to help the vulnerable, or to take exercise. This period of semi-confinement must be a very difficult one for many, though here at Mills Towers things are quite quiet, and, as I enjoy being at home anyway, at least most of the time, the imposed restrictions have not been very onerous. But like everyone, the threat of coronavirus that hangs over all of us has put me slightly on edge, and who knows how we and the world around us will be changed by it – let us hope, despite the horror, it is for the better. I’ve been keeping a journal over the past fortnight, though this is something largely for posterity, and I haven’t yet decided to publish it online. I don’t know if it might interest future social historians, but then what may seem trivial or everyday to us may seem unusual or surprising to them.

In the meantime, while we wait for the restrictions to lift, I thought you might enjoy this podcast from Art Matters, with Ferren Gipson and Dr Michael Newton, on how artists have portrayed the world of fairy tales. Take care of yourselves.

The paths will still be there when we can walk properly again. And congratulations to the “Don’t Lose Your Way” Team at The Ramblers who have now completed the first stage of their important campaign to get lost paths back on the map. Well done to everyone who participated. The piece below is from my forthcoming book – a revised and expanded new edition of The Compleat Trespasser, out in May.

We all use paths to access the countryside, whether we consider ourselves ramblers or just use them as somewhere to walk the dog. Or sometimes as a short-cut, the easiest way to get from one place to another. We may well notice our surroundings, the places we walk through, but how many of us consider just why the path is there, why it even exists?

Just started work on a new writing project, and it’s at that very tentative stage, where I’m not sure where it’s going or even if it’s got legs. After spending the past decade on the Glenaster Chronicles, my trilogy of fantasy stories about a young girl who goes in search of revenge after her home and family are destroyed, it’s been hard to shake myself out of that and into something new, though I have plenty of notebooks full of ideas, half-remembered dreams, (bad) pictures, and beginnings of stories.

I’m sure this is the process everyone goes through when starting a new writing project, but always I have that fear, that I might not be able to do it again, that I can no longer write, that the Muse has upped and left me, and set up home in a more comfortable house, with better heating and nicer biscuits. But of course I will persevere, though it sometimes feels like a futile task, because there is always this itch I need to scratch, whether or not anyone is paying attention. The solitary nature of writing can sometimes make you feel like you’re going mad, or wasting your time, when you could be doing something more constructive, like doing the laundry, or feeding the cat, or vegetating in front of the TV, and any rewards it offers (and I’m talking about the satisfaction of a job well done, or positive feedback from readers – let’s face it, for most of us it doesn’t offer much in the way of financial reward!) are few and far between.

But nevertheless, those rewards are real – and it becomes, if you do it enough (and, crucially, make a habit of it), its own reward.

…I always insist on using the apostrophe, to distinguish it from “Halloween”, the increasingly ghastly (in every sense) commercial enterprise that creeps round every year to wring cash from people’s pockets.

I’ve written before on here about Hallowe’en and its various customs, so won’t go over the same ground again – but this podcast from Art Matters, on witches in art, is fascinating, and a great listen.

Wherever you are, enjoy Hallowe’en (or ignore it entirely, according to preference!)… 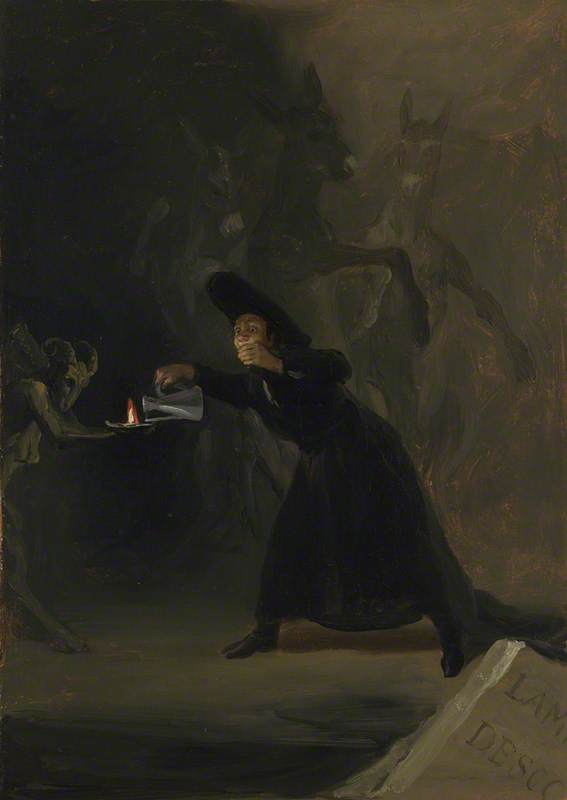 I don’t write nearly as much as I should, or would like to.

Partly this is laziness, the procrastination that afflicts us all, perhaps especially writers; partly it is simple lack of time, because there are a hundred and one other things to do, from work, to washing, to cooking, to cleaning, to emails, to speaking to people, to visiting friends and family.

Not all of these things are chores, of course, even if sometimes they might feel like them…! But they all take away from writing time, which is really thinking time. Coleridge was famously interrupted by “a person on business from Porlock” when he was busy writing down his poem Kubla Khan – and by the time he returned to his desk, he’d forgotten the rest of it. Writers are selfish creatures, and we need – indeed, we demand – time to think, and for that I imagine most of us need some peace and quiet.

This is tricky, because in today’s world, peace and quiet are at a premium, probably because you can’t make money out of them. Silence means having to think, and thought is frowned upon. “Most people would die sooner than think – in fact they do so,” said the philosopher Bertrand Russell, in a famous quotation that perhaps betrays a certain snootiness on his part. Well, we can’t all be intellectuals like Bertrand Russell – but we should be intellectually curious, I believe, because knowledge enriches our lives, and, though it can also expand our earning potential, that is not and should not be its primary purpose. The marketisation of everything, including education, over the past forty years has done untold damage, in promoting and entrenching the pernicious idea that only things with a tangible commercial value have any worth. You don’t have to be a raving socialist to reject this ugly notion – it’s an offence to the spirit. And anyway, so much of life, including writing, is a fluke, however hard you work or however many times you practise. There is often a look of slight surprise on the athlete’s face when he or she makes that high jump, or wins that race, or throws that javelin the record distance – though they’ve done it before, they know there’s no guarantee they can do it again, and are relieved as much as anything when they do. Not all of us are going to be world-beating athletes, of course, or world-beating anything necessarily; but, as a writer, to finish a story, to shape a sentence the way we want it, to finish a novel, even if few people read it, brings a great sense of achievement.

It also brings with it a certain melancholy – will we be able to do it again? We don’t know. When writing, we come up against our own limitations time and again. It can be frustrating, even distressing. Yet still we persist, and, when we’re done, prepare to start all over again, hurling ourselves against the unforgiving rock  of our own minds, hoping for a toe-hold.

A Blog about Music and Popular Culture

Rambling in the British Countryside

One Chance to See the World
Nordic Lights & Mediterranean Landscapes

A Blog on Travels, Food, Photography and Design

Author of fairy tales with a folkpunk and steampunk twist

BY GRACE THROUGH FAITH

An exploration of writing and reading

Fantasy, scifi and queer comic reviews for the discerning reader

The Reader Inside Me
Lakshmi Padmanaban

Museums of People // Libraries of the Dead

skipahsrealm.com/
gallybeggar
Create a free website or blog at WordPress.com.